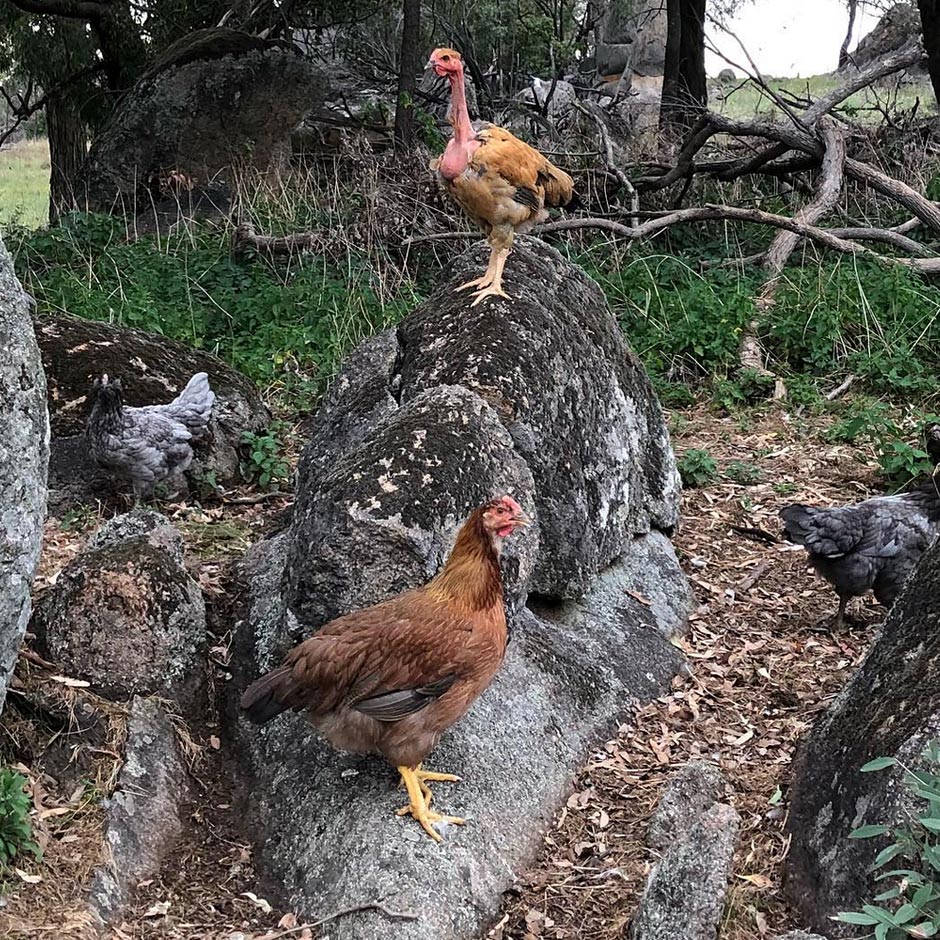 Chicken, once a rare treat, is now our most popular meat. We’re the fourth largest consumers in the world, eating 600 million chickens a year or 45 kilograms each. Supermarkets own the largest slice of the chicken pie, selling over 50 per cent produced.

It’s convenient and cheap, deemed the ‘healthier’ meat, mildly flavoured so appealing to kids. Available year round so we eat without thought, much less ceremony.

Whereas I’ve been anticipating this chook. For. A. Year.

Sommerlad chicken: return to the old for something new
On Christmas Eve 2013, Kathryn Sommerlad emailed, requesting her family business to be listed on the chicken directory.

“For over ten years we’ve been breeding slower growing heritage-style table poultry for their higher welfare characteristics and traditional flavour,” she wrote.

From time to time I’d wistfully sigh, viewing photos of French butchers for their magnificent poultry. And, I came to believe, our own industry needed hardier broilers (meat chickens) to survive more frequent extreme weather on the horizon.

I learned her husband consulted the outdoor poultry industry and had experience in breeding. They selectively bred from heritage breeds—the Australian Game, Croad Langshan and Plymouth Rock—to produce birds with strong legs, the ability to forage and resist heat.

And because they live long lives, they produce more flavoursome meat.

“Hooray you’ve saved the day!” I excitedly typed. “I’d be very interested in buying a chicken, once they reach Sydney.”

“We’d be happy to give you one,” she replied.

I told everyone who I thought would be interested.

Australia’s chicken history
Just a generation ago, Australians kept chickens for their eggs. The meat they ate was six-month-old males (cockerels), or spent layer hens. Eating chicken was considered a luxury, savoured at Christmas and other special occasions. Over time a cottage industry developed, providing greater volumes of much the same.

Meanwhile in the United States, “Chicken of Tomorrow” contests were held, where breeders developed separate meat chickens to put on weight faster, thus cheaper, with small bones and large breasts.

In no time they had success! They grew the broilers in deep litter indoors and soon there was an abundance. Priced well below beef, consumption grew to 40 pounds, compared to our ten.

“The consumers have been educated to buy chicken meat every day in the year,” said Dr. George Hart, former Dean of the School of Veterinary Medicine, from California University.

“Surely we could do the same,” said our fledgling industry.

Crossbreeding began in earnest to create a broiler to call our own. Within a decade, frozen chickens appeared in poultry shops, butchers, supermarkets and chain stores. Chicken was within the weekly budget of most families; it was well and truly democratised.

Behind cheap and convenient
Just two companies control 70 per cent of the Australian chicken meat market: Ingham (owned by US-based TPG Capital) and Baiada (with brands Lilydale and Steggles). Since 1990 the vast majority of broilers are from the same genetic stock—the Cobb 500 or Ross 308—developed by international agribusiness. They may be slaughtered as early as 35 days.

The meat is unbelievably cheap. So who pays the price?

One year and a day later
Winging their way from the Sommerlads, day-old chicks landed in bucolic Buena Vista Farm where they grew for nine weeks, foraging for worms, bugs and grubs on pasture. Feather and Bone brought the first of the dressed birds to Sydney.

Bound for the Christmas table, my chicken was roasted long and slow, with lemon, garlic and thyme. The taste? Stronger chicken flavour with firmer flesh texture.

For over 50 years we’ve been conditioned to believe cheap food is best. Some may think well-grown meat is a luxury but think nothing of mobile phones, widescreen TVs or holidays overseas.