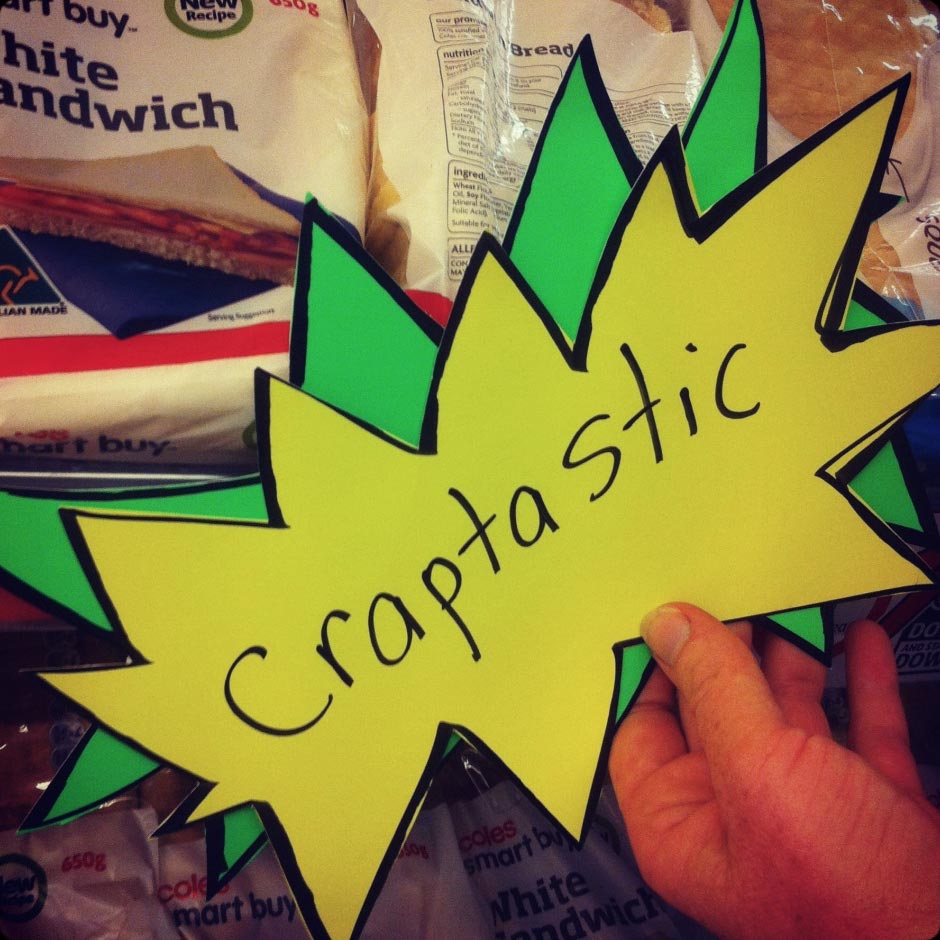 This is the final essay to complete my Masters of Public Health. If you don’t want to read 2,000 words, here’s two. Shop local. Public health professionals, more research is needed regarding supermarket marketing and buyer behaviour.

Duopoly power, food and health
Dietary risks cause the majority of the burden of disease in Australia, related to high consumption of energy-dense and nutrient-poor foods and/or low levels of consumption of nutrient-dense foods (Department of Health, 2013; National Health and Medical Research Council, 2013). Food choices are influenced by a multitude of factors, yet there is a suggested link between changes in the environment and the rapid rise of excess weight gain that promotes unhealthy choices to the detriment of healthy ones (Swinburn et al., 1999). Supermarkets play a role in both the micro- and macro-environment with positive or negative dietary implications, which Hawkes (2008) determined, depends upon the context and population group.

Thus follows a review of the Australian context whereby two supermarkets, Coles and Woolworths, dominate food retail with over 70% market share for packaged food and 45-50% for fresh food (The Conversation, 2013). Referencing a range of sources (e.g. scientific literature, industry and media) and using fresh produce and discretionary food (e.g. snacks and sugar-sweetened beverages) as examples, this essay explores how their businesses impact diet-related health and food system resilience.

Production, distribution and logistics
Seeking commercial efficiencies, both Coles and Woolworths overhauled their supply
chain—consolidated their distribution centres and suppliers—resulting in a reduction of time products spend in the supply chain and on the shelf (Sapere Research Group, 2011). They bypassed the wholesale markets with the majority of produce supplied through direct contracts (Sapere Research Group, 2011; Deloitte, 2012; CDI Pinnacle Management, 2008).

There has been structural adjustment as a response. Growers increased their farm size and production or formed marketing groups (CDI Pinnacle Management, 2008). The cost of doing business with the chains is high—associated with packhouse reconfiguration, packaging, compliance with private quality assurance standards, transport and stock management—and some express concern about the increased costs and duplication of efforts (Thompson and Lockie, 2012; CDI Pinnacle Management, 2008). An inordinate amount of waste occurs with produce discarded for strict cosmetic standards; an estimated 10-30% of north Queensland bananas are rejected on-farm, resulting in 37 000 tonnes of bananas discarded annually (White et al., 2011). Anecdotally, a grower must produce enough for the maximum-sized order, yet as order sizes vary, they destroy the excess (Knox, 2014).

Farmers have undertaken large debts and are under increasing pressure to raise production to remain viable; they tend to buy more land and intensify, specialise and concentrate production (The State of Victoria Department of Sustainability and Environment, 2010). Only seven farms produce 85% of Australia’s ware potatoes; four growers supply 70% of lettuce; one grower provides 50% of carrots; and one supplies 60% of Australian-grown garlic (McKinna, 2011).

Coles and Woolworths have invested significantly in private-label ranges, pursuing international sourcing opportunities to compete with national brands. Private-label growth has coincided with a surge in processed food imports, most pronounced in the processed fruit and vegetables category (Hattersley, 2012). The influx of low-cost imports and the downward pressure on prices through the wholesale bypass have contributed to the erosion of farmers’ margins (IBISWorld 2014; IBISWorld 2014a; IBISWorld 2014b). Declining terms of trade has forced smaller growers to exit (IBISWorld, 2014; IBISWorld, 2014a; McKinna, 2011).

Through their cost reduction strategies, Coles and Woolworths concentrated and lengthened the food supply chain, and hence weakened its resilience. The supply chain is reasonably resilient with a local crisis yet highly vulnerable in the face of the combined effects of multiple disasters, fuel price increases and large-scale pandemics (Sapere Research Group, 2011).

Place
Woolworths has 941 full-line stores nationwide while Coles has 762 (Wesfarmers, 2014; Woolworths, 2014). To extend their reach into new commodity and consumer segments (Pritchard, 2000) they build stores in new formats: full-line, convenience/petrol, big box, metropolitan and the new market/experience. To optimise sales, they either close underperforming stores, refurbish them or open new ones (Speedy, 2014; Smith, 2006). In some stores, trading hours are until midnight, whilst others are open for 24 hours. Both have plans for store expansion (Property Council of Australia, 2014). They also operate in multiple channels; they dominate (67%) the online grocery sector with their website, phone and tablet apps, with both optimising order fulfilment to overcome shopping barriers (IBISWorld, 2014c).

Greengrocer numbers plunged (56%) between 1992 and 1999, attributed to supermarkets’ extended trading hours, and again (13.4%) during the 2010-2011 price war (IBISWorld, 2014d), which diminishes healthy food access and an important retail channel for small to medium growers.

Evidence of a relationship between neighborhood food environments and differing diets due to socioeconomic status is limited, in part due to the absolute measures used (e.g. store density) or limited measurement of actual behaviour (e.g. shoppers may travel further if they have a car). On the other hand, Inglis et al. (2008) discovered perceptions of the availability, accessibility and affordability of food explained socioeconomic differences in dietary behaviour. Similarly Thornton et al. (2012) found that women who were confident in their ability to shop for healthy food locally ate fast food infrequently, compared to frequently. Williams et al. (2010) discovered women of low socioeconomic status with perceptions of high availability (quality and variety) of healthy food options were associated with high fruit and vegetable consumption.

Product
In brand building exercises, the supermarkets communicate their value fresh food credentials, yet alongside fresh produce they retail a large volume of well-marketed discretionary food. It is rare for nutritional studies to record the source of food, yet Hafekost et al. (2011) recorded 77% of sugar-sweetened beverages that children consumed were sourced from supermarkets. Given that the majority of school lunches are brought from home, hence likely sourced from the supermarket, the fact that over 90% of children had energy-dense, micronutrient-poor snacks in a lunchbox survey is similarly, a concern (Sanigorski et al., 2005).

Supermarkets are the dominant distribution channel for discretionary food. They are the largest source of industry sales for manufacturers of soft drink (55%), chocolate and confectionery (60.8%), with additional sales through wholesalers. They are second only to grocery wholesalers for snacks (33.1%) (IBISWorld, 2014d; IBISWorld, 2014; IBISWorld, 2014g ). Approximately 30% of total shelf-space in Coles and Woolworths’ full-line stores are allocated to non-core food (Melchers et al., 2009), more than supermarkets in seven other countries (Thornton et al., 2013). The high visibility and availability of non-core food normalises routine purchase and encourages home availability, associated with increased consumption in some populations (Stephens et al., 2012).

Researchers investigated the differences in shelf-space allocation for non-core to core food in Coles and Woolworths supermarkets in neighborhoods of differing socioeconomic status. Melchers et al. (2009) found no significant difference, yet despite this, shoppers who lived in disadvantaged neighbourhoods purchased significantly more non-core food, indicating that other elements (e.g. price, promotion or personal factors) were at play. Yet more recently Cameron et al. (2012) found disadvantaged neighbourhoods were exposed to more unhealthy food; however purchases, much less consumption, was not measured.

Price and promotion
Supermarkets influence purchasing patterns through price, promotion and advertising. The entry and rapid rise of discount supermarket ALDI has introduced price competition in some locations. In response, first Coles and then Woolworths, are attempting to position themselves as price leaders; they have also put a downward pressure on prices to defend their market share (IBISWorld, 2014f; KPMG, 2014).

Sales promotions are partially or fully funded by manufacturers, calculated at a percentage of annual sales. They account for 39.6% of groceries purchased in Australian supermarkets and lead to significant sales increases in the short-term (Hawkes, 2008; KPMG, 2013). According to Woolworths Limited (2014), one quarter of their customers purchase close to half of their food and drinks on special.

Prices affect consumers’ decision on what to buy so they are more likely to buy food perceived to be “good value” relative to others (Hawkes, 2008). The degree to which demand changes in response to price is known as elasticity; this varies among products and tends to depend upon how necessary the product is to the consumer. Fresh vegetables are inelastic, whereas fresh fruit and soft drinks (according to American studies) are marginally elastic (Ulubasoglu et al., 2011; Andreyeva, 2010). Thus many of the essential foods used in the large campaigns (e.g. milk) would have little or no effect on consumption, yet instead influence choice of brand or retailer. On the other hand, the two major supermarkets distribute approximately 14 million catalogues weekly (Greenblat, 2009; Goetze, 2014) with a content bias (Coles 39.9% vs 6.5% and Woolworths 29.8% vs 8.1%) towards unhealthy food (Cameron et al., 2014).

There is a dearth of research on supermarket promotions, much less research on offers for different areas, or how different population groups behave in response to the promotions. It is unknown if food purchased on promotion is eaten, stored or wasted. And the interplay between the effects of location, retail format, merchandising, pricing, promotion and buyer behaviour are bound to be complex. Both supermarkets have tracked shopper habits using credit and loyalty cards, online stores and through partnerships, yet more recently Woolworths invested in customer analytics company Quantium. Using analytics Woolworths is expected to improve pricing and promotion, ranging and store layout (Connolly, 2014). Highly targeted—hence more effective—promotions are a likely outcome.

Conclusion
In her international review, Hawkes (2008) states the supermarket message is to “eat more”, countering the message to eat in moderation. She reasons that it is this, rather than the focus on energy-dense and nutrient-poor foods, that they can be associated with the development of an obesogenic environment. She also shared the importance of understanding the way different people respond in their food choices to supermarkets in different localities and populations, utilising both quantitative and qualitative techniques. Yet to date, studies on the effect of Coles and Woolworths on food choice and dietary health are rare.

What is clear is they have decreased food system resilience through their just-in-time supply chain logistics, consolidating suppliers and distribution centres. Large, monoculture farms are favoured over small and medium diverse ones. While this may seem efficient or cost-effective it does rely on the availability of inputs (e.g. oil) and favourable conditions, free from extreme weather. Therefore, it is prudent to ensure small farms in or near the city, regional medium-sized farms and the alternative retailers (e.g. online stores, box schemes, greengrocers, co-operatives and markets) that support them continue, to build resilience and a healthy food supply.

Bibliography
Andreyeva, T., Long, M., Brownell, K. (2010). The Impact of Food Prices on Consumption: A Systematic Review of Research on the Price Elasticity of Demand for Food. American Journal of Public Health. 100(2). pp.216-222.

Cameron, A., Sayers, S. and Thornton, Lukar (2014). A comparison of the content of Australian supermarket catalogues and the Australian guide to healthy eating. Malaysia: International Congress of Obesity.

Department of Agriculture, Forestry and Fisheries (2012). FOODmap: An analysis of the Australian food supply chain. Canberra: Commonwealth of Australia.

Goetze, E. (2014). Woolworths wants to be king on all platforms. The Newspaper Works. http://www.thenewspaperworks.com.au/woolworths-wants-to-be-king-on-all-platforms [Accessed: 15 November 2014].

IBISWorld (2014a). IBISWorld Industry Report A0139 Citrus, Banana and Other Fruit Growing in Australia. Melbourne: IBISWorld.

Speedy, B. (2014). Coles concentrates on costs as CEO warns on consumer spending. The Australian [online] Available at: http://www.theaustralian.com.au/business/companies/coles-concentrates-on-costs-as-ceo-warns-on-consumer-spending/story-fn91v9q3-1226375586101 [Accessed 13 Nov. 2014].

Swinburn, B. Egger, G. and Raza, F. (1999). Dissecting Obesogenic Environments: The Development and Application of a Framework for Identifying and Prioritizing Environmental Interventions for Obesity. Preventive Medicine, 29, pp.563-570.

The Conversation (2013). FactCheck: is our grocery market one of the most concentrated in the world? [online] Available at: http://theconversation.com/factcheck-is-our-grocery-market-one-of-the-most-concentrated-in-the-world-16520 [Accessed 13 Nov. 2014].

White, A., Gallegos, D. and Hundloe, T. (2011). The impact of fresh produce specifications on the Australian food and nutrition system: a case study of the north Queensland banana industry. Public Health Nutrition, 14(08), pp.1489-1495.

Williams, L., Ball, K. and Crawford, D. (2010). Why do some socioeconomically disadvantaged women eat better than others? An investigation of the personal, social and environmental correlates of fruit and vegetable consumption. Appetite, 55(3), pp.441-446.